Boat Builders is an animated short film produced by Walt Disney, distributed by RKO Radio Pictures and released on February 25, 1938. The film was directed by Ben Sharpsteen and animated by Frenchy de Trémaudan, Louie Schmittt, Chuck Couch, Eddie Strickland, Clyde Geronimi, Paul Satterfield, Archie Robin, Don Patterson. Mickey (with help from Donald and the Goof) attempts to assemble a boat from plans “so simple a child could do it”. Unfortunately, they’re not children. 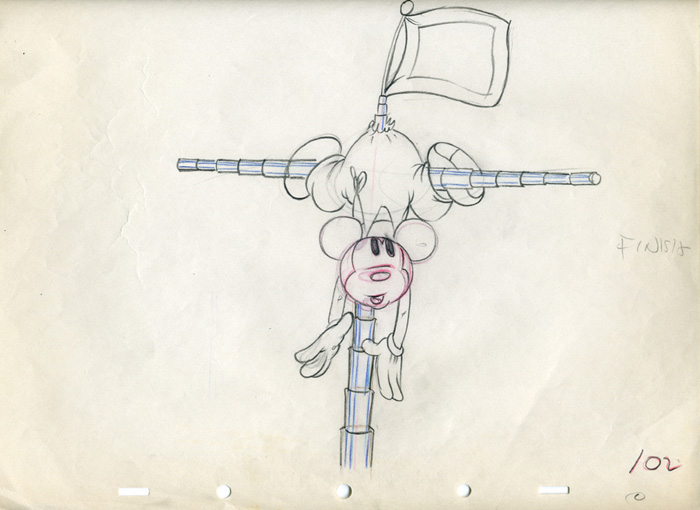 Animation Cel Drawing Mickey Mouse on Mast
Year: 1938
Width of Image = 7 inches
Height of Image = 8 inches
Width of Art = 12 inches
Height of Art = 9.5 inches
Price $900
In Boat Builders, Mickey and his friends Donald and Goofy try to build a boat (which they name Queen Minnie), which is made from fold-out parts. Naturally, they encounter many problems as they go (e.g. Donald paints the rudder which keeps being turned by Mickey, and Goofy thinks the figurehead is an actual woman). Their maiden voyage turns out to be their last, as the boat collapses as it sets sail, thanks to Minnie hitting the champagne bottle (to christen the boat) just too hard on the boat.