The songs in Snow White and the Seven Dwarfs were composed by Frank Churchill and Larry Morey. Paul J. Smith and Leigh Harline composed the incidental music score. Well-known songs from Snow White and the Seven Dwarfs include “Heigh-Ho”, “Some Day My Prince Will Come”, and “Whistle While You Work”. Because Disney did not have its own music publishing company at this time, the publishing rights for the music and songs were administered through the Bourne Co., which continues to hold these rights. 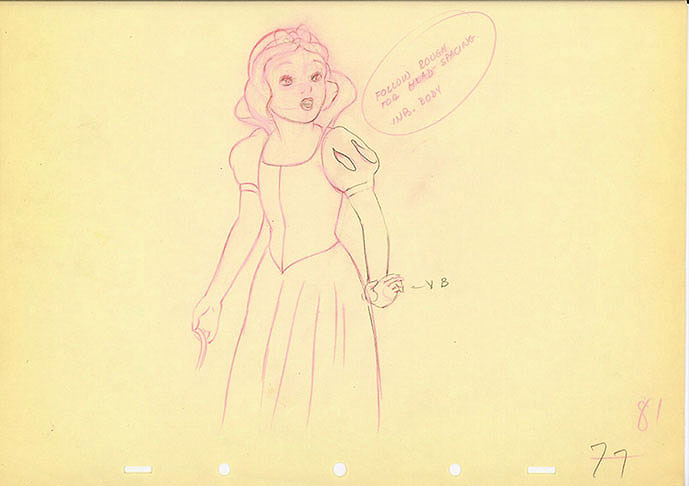 Animation Cel Drawing of Snow White
Year: 1937
Studio: Disney Studios
Width of Image = 3.75 inches
Height of Image = 7.5 inches
Width of Art = 12 inches
Height of Art = 10 inches
Price $1,000
Walt Disney had to fight to get the film produced. Both his brother and business partner Roy Disney and his wife Lillian attempted to talk him out of it, and the Hollywood movie industry referred to the film derisively as “Disney’s Folly” while it was in production. He even had to mortgage his house to help finance the film’s production, which eventually ran up a total cost of $1,488,422.74, a massive sum for a feature film in 1937.