Alice in Wonderland cel along with the cards cel are all in the maze – a 19″ panoramic production watercolor background. This all production animation art set-up is perfect for anyone who ever gets that I’m trapped in the maze of life feeling.

After Alice gets lost in the Tulgey Wood, the Cheshire cat appears and leads Alice into a giant maze of hedges. The maze is part of a kingdom ruled by the tyrannical Queen of Hearts and her smaller husband, the King of Hearts. The Queen beheads anyone who enrages her. The Queen’s men who of course are all playing cards, chase Alice all through the maze.

This Alice in Wonderland cel depicts this famous scene perfectly and impressively. The maze was recreated in Disney parks including Disneyland Paris. 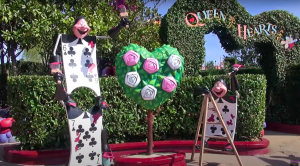 The hedge maze is themed around scenes and characters from the Disney 1951 feature Alice in Wonderland. It comprises two sections: the first one with some of Alice’s adventures prior to meeting the Queen of Hearts, and the second based on Alice’s encounter with the Queen, who had a similar labyrinth in the film.

The goal of the maze is to reach the Queen of Hearts’ Castle, where one can obtain an aerial view of the Fantasyland section of the park. One can exit the maze prior to entering the second area, and the maze’s route is similar in shape to the body of the Cheshire Cat, with a semi-floral recreation of the character’s face adjacent to the attraction.

Alice in Wonderland Cels are always exquisitely inked and colored. 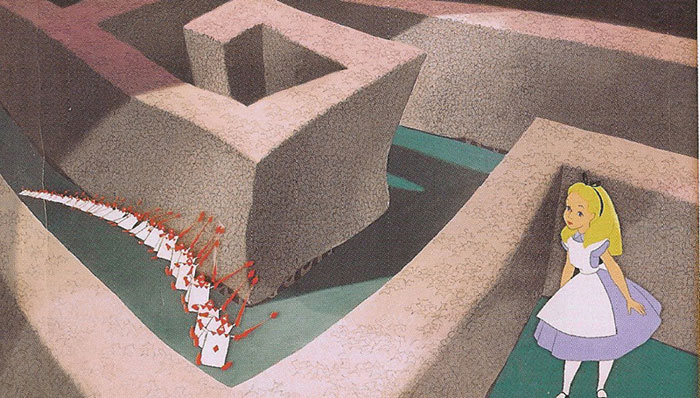 Animation Cels of Alice and the Cards in the Maze
Year: 1951
Studio: Disney Studios
Width of Image = 17.5 inches
Height of Image = 6.25 inches
Width of Art = 19 inches
Height of Art = 11 inches
Background: Production Background
Price $18,000
Walt Disney was familiar with Lewis Carroll’s Alice books, Alice’s Adventures in Wonderland (1865) and Through the Looking-Glass (1871), and had read them as a school boy. In 1923, he was a 21-year-old aspiring filmmaker working at the Laugh-O-Gram Studio in Kansas City, making the unsuccessful short cartoon series by the name of Newman Laugh-O-Grams. The last of Newman Laugh-O-Grams was called Alice’s Wonderland, which was loosely inspired by the Alice books. The short featured a live-action girl (Virginia Davis) interacting with an animated world. Faced with business problems, however, the Laugh-O-Gram Studio went bankrupt in July 1923, and the film was never released to the general public. However, Disney left for Hollywood and used the film to show to potential distributors. In 1865 the child world was made glad by the appearance of Lewis Carroll’s Alice in Wonderland. It is a universal story and so belongs to all time. It has never gone out of fashion and never will as long as children love wonder stories and grown-ups have young hearts. Speak roughly to your little boy, And beat him when he sneezes: He only does it to annoy, Because he knows it teases. I speak severely to my boy, I beat him when he sneezes; For he can thoroughly enjoy The pepper when he pleases!