Jiminy Cricket explains to the audience that he is going to tell a story of a wish coming true. His story begins in the Italian workshop of a woodworker named Geppetto. Jiminy watches as Geppetto finishes work on a wooden marionette whom he names Pinocchio. Before falling asleep, Geppetto makes a wish on a star that Pinocchio will be a real boy. During the night, a Blue Fairy visits the workshop and brings Pinocchio to life, although he still remains a puppet. She informs him that if he proves himself brave, truthful, and unselfish, he will become a real boy, and assigns Jiminy to be his conscience.

This large Courvoisier animation art cel and background show the pair as Jiminy floats down on his umbrella instructing Pinoke. Jiminy Cricket was given the job by the Blue Fairy as Pinocchio’s conscience.

“I dub you Pinocchio’s conscience, lord high keeper of the knowledge of right and wrong, counselor in moments of high temptation, and guide along the straight and narrow path. Arise, Sir Jiminy Cricket.” 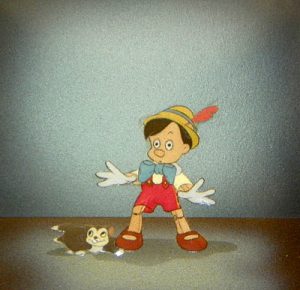 Figaro might have been Pinoccio’s pet as this animation art cel shows but it was Jiminy who stood tall for Pinoke.

Animation Cel of Pinocchio and Jiminy Cricket
Year: 1940
Studio: Disney Studios
Width of Image = 6 inches
Height of Image = 6.5 inches
Width of Art = 8 inches
Height of Art = 7.5 inches
Background: Courvoisier Background
Price $8,000
Jiminy Cricket appears as a live character at the Disney theme parks. He is usually seen alone or with Geppetto or Pinocchio. He also appears as a safety mascot along with Pinocchio and Geppetto. He also acts as a mascot of Disney’s environmental initiatives in the parks, appearing on recycling cans. His film and TV career flourished in many ways for many years right up until today. Unlike Snow White, which was a short story that the writers could expand and experiment with, Pinocchio was based on a novel with a very fixed story. Therefore, the story went through drastic changes before reaching its final incarnation. In the original novel, Pinocchio is a cold, rude, ungrateful, inhuman creature that often repels sympathy and only learns his lessons by means of brutal torture. The writers decided to modernize the character and depict him similar to Edgar Bergen’s dummy Charlie McCarthy, but equally as rambunctious as the puppet in the book. The story was still being developed in the early stages of animation.