The Evil Queen (animation art cel) is the stepmother of Snow White. Once her magic mirror tells her that Snow White is fairer than she is, she immediately enlists her huntsman to kill her in the woods….and to bring Snow White’s heart back to her in this very box.

The dwarfs tried to protect Snow White like Grumpy shown in the animation art cel.
You can see a page of Grumpy here.

This Courvoisier animation art cel and background is the most desirable image of the greatest villain of all. Her name was given as Queen Grimhilde in some old publicity material and comics, but this is seldom acknowledged by the Walt Disney Company.

Animation art – In 1928, Steamboat Willie, featuring Mickey Mouse and Minnie Mouse, popularized film with synchronized sound and put Walt Disney’s studio at the forefront of the animation industry. In 1932, Disney also introduced the innovation of full color (in Flowers and Trees) as part of a three-year-long exclusive deal with Technicolor.

The enormous success of Mickey Mouse is seen as the start of the golden age of American animation. That classic style and all work done by hand only would last until the 1960s. At that time hand inked cels gave way to inking being done by xerox. The golden age of animation was ending, but new computer technology would revolutionize the art in the future. 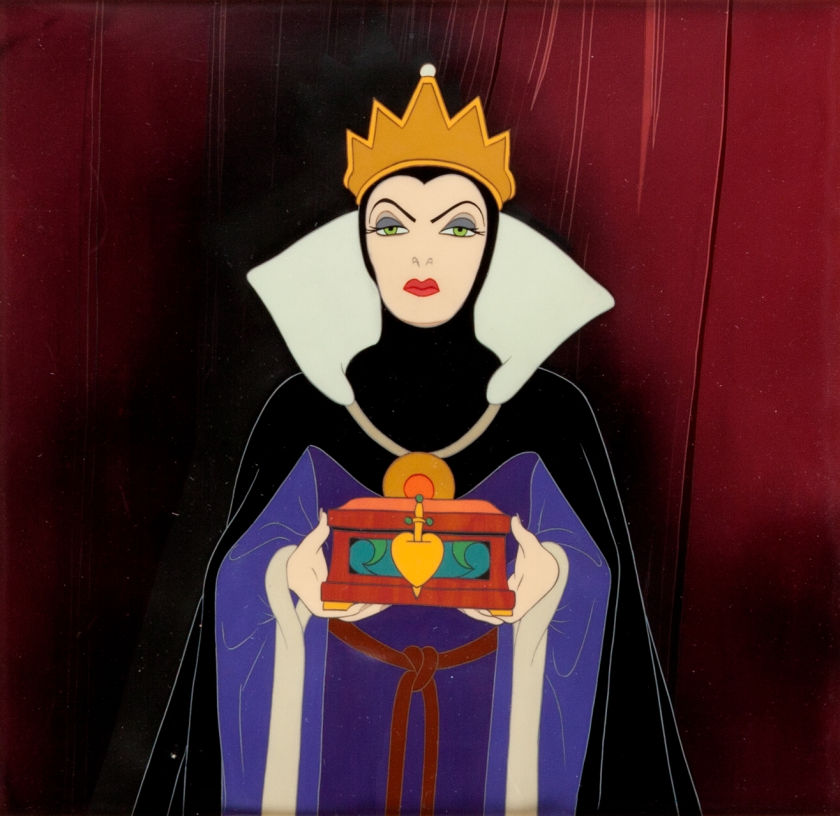 Animation Art Cel of The Evil Queen with the Heart Box
Year: 1937
Studio: Disney Studios
Width of Image = 6.00 inches
Height of Image = 7.00 inches
Width of Art = 8.00 inches
Height of Art = 8.00 inches
Background: Courvoisier Background
Price $28,000
Animation art cel of the Queen who is extremely beautiful but very vain. She seduced and married a widowed king, who had a daughter called Snow White with his first wife. After the king died, the Queen sent Snow White to work in her castle and forced her stepdaughter to abandon her title as Princess. This interpretation of the classic fairy tale character has been very well received by film critics and the general public. Not only is she considered Disney’s most iconic and menacing villain, but Disney’s version of the Queen has also become a popular archetype that influenced a number of artists and non-Disney works. Animation heart cels of the Evil Queen are some of the most desired.