Captain Hook is introduced in Peter Pan as a cunning, sinister man, plotting to trap Peter in his lair, but also a bit of a buffoon, hiding from the crocodile nicknamed ‘Tick Tock’ who took off his hand. He seeks revenge on Peter Pan for having fed the crocodile his hand amidst the battle, and will keep his ship and its crew anchored in Never Land’s waters until he finds the boy. This cel is the perfect Hook; he’s smoking his double cigar, he’s brandishing his namesake Hook, and consulting the map to snare his nemesis, Peter Pan. 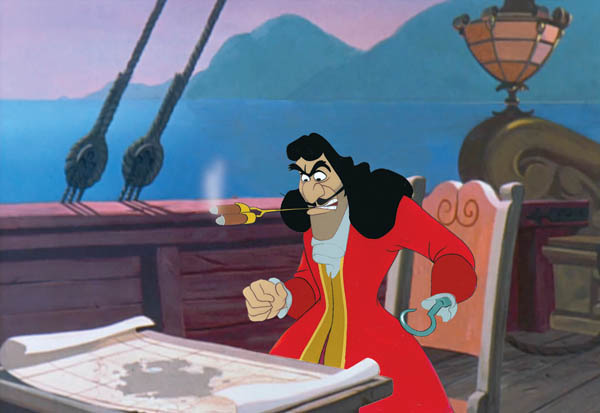 Animation Cel of Captain Hook with Cigar
Year: 1953
Width of Image = 6 inches
Height of Image = 6 inches
Width of Art = 13 inches
Height of Art = 9 inches
Background: Presentation Background
Price $4,000
Frank Thomas was the directing animator of Hook. One director insisted that Hook should be a darker villain with no comedic traits. Yet this would not work during the crocodile scenes. The animators realized he could not be truly evil, because of the children in the film that he would be threatening. The result is a “bad guy,” but only to the point of matching Peter Pan. Actor Hans Conried set the tone for Disney’s interpretation of Hook. He was the original voice for the Captain, as well as, in the tradition of the stage play, Mr. Darling. In addition Conried’s acting skills were used, as he performed live-action reference for the two characters. Captain Hook did not appear in early drafts of the play, wherein the capricious and coercive Peter Pan was closest to a “villain” but was created for a front-cloth scene (a cloth flown well downstage in front of which short scenes are played while big scene changes are ‘silently’ carried out upstage depicting the children’s journey home. Later, Barrie expanded the scene, on the premise that children were fascinated by pirates, and expanded the role of the captain as the play developed. The character was originally cast to be played by Dorothea Baird, the actress playing Mary Darling, but Gerald du Maurier, already playing George Darling (and the brother of Sylvia Llewelyn Davies), persuaded Barrie to let him take the additional role instead, a casting tradition since replicated in many stage and film productions of the Peter Pan story. According to A. N. Wilson, Barrie “openly acknowledged [that] Hook and his obsession with the crocodile was an English version of Ahab”, and there are other borrowings from Melville. Barrie states in the novel that “Hook was not his true name. To reveal who he really was would even at this date set the country in a blaze”. He is said to be “Blackbeard’s bo’sun” and “the only man of whom Barbecue was afraid”.[5] (In Robert Louis Stevenson’s Treasure Island, one of the names Long John Silver goes by is Barbecue.)[6] In the play, it is implied that Captain Hook attended Eton College and Balliol College, Oxford, and his final words are “Floreat Etona”, Eton’s motto. In the novel, Hook’s last words are a similarly upper-class “bad form”, in disapproval of the way Peter Pan beats him by throwing him overboard. The book relates that Peter Pan began the ongoing rivalry between them by feeding the pirate’s hand to a crocodile. After getting a taste of Captain Hook, the crocodile pursues him relentlessly, but the ticking clock it has also swallowed warns Hook of its presence.