Grumpy the Dwarf, like all of the seven, has a unique and different personality. Grumpy lives out his days with a sour deposition. Throughout most of the film, he portrays negative, and even antagonistic traits, such as being overly rude, overbearing, arrogant, condescending, and sexist.

Aside from this, Grumpy the Dwarf is perhaps the most capable and competent of the dwarfs. Perhaps, for this reason, he seems to resent Doc’s position as a leader often doubting Doc’s capabilities. He is also notably annoyed by Dopey’s antics, Bashful’s shyness, and Sneezy’s nasal explosions. Though stubborn, he has a compassionate heart as any, though he rarely admits this.

He’s also shown to be quite intelligent, and rather fearless for the most part. While opinionated, and typically against change, Grumpy’s mindset and views are shown to be able to change for the better, though the process for doing so proves to be lengthy.

This animation cel is a large and quintessential image of Grumpy the Dwarf and is paired with a hand painted presentation background. 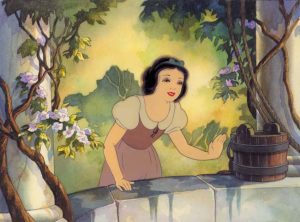 Snow White always tried to coax Grumpy out of his bad mood.

Mint condition, a little glare only in the image. 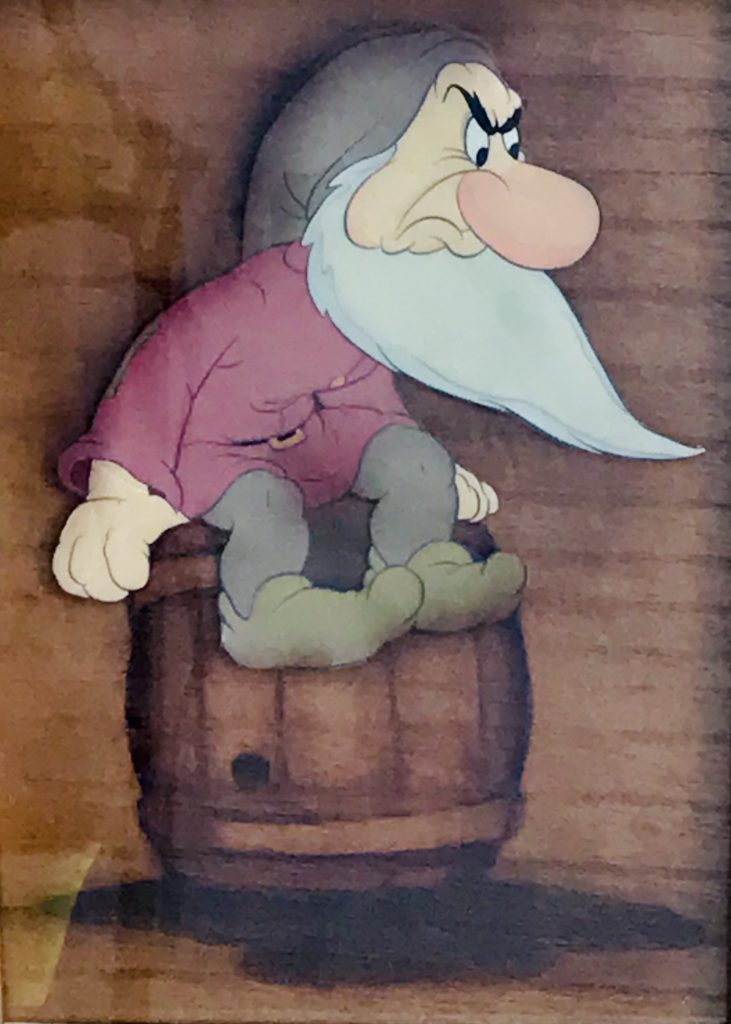 Animation Cel of Grumpy Angry on Barrel
Year: 1937
Studio: Disney Studios
Width of Image = 4 inches
Height of Image = 4.25 inches
Width of Art = 5 inches
Height of Art = 7.25 inches
Background: Presentation Background
Price $2,800
Grumpy the Dwarf has an extreme distrust for women at the start of the film, believing them to possess black magic and wicked intentions. It is likely that he came to believe this from hearing stories about the evil Queen. Because of his fear, Grumpy initially opposes the other dwarfs’ decision to let Snow White stay with them. Like all the dwarfs, Grumpy obviously has a soft spot for Snow White. However, unlike the others, for most of the film, he strongly denies it. Throughout the movie, the friendship between the two grows, with Snow White being more than aware of it. After Snow White kisses him on the head Grumpy’s gratitude and infatuation overcome him, resulting in the usually grouchy dwarf dreamily gazing at the princess, though only to snap out of his gaze and storm off. Caught off guard, Grumpy the Dwarf accidentally bumps into a tree, falls into a stream, and hits his head on the underside of a bridge. When Snow White is thought to be dead Grumpy the Dwarf tries to hold it in but eventually starts to sob, regretting how he treated her before her death and wishing he had been nicer to her She even enjoys playfully teasing the stubborn dwarf on his “dislike” towards her. However, at the climax of the film, Grumpy heroically leads the dwarfs on a mission to rescue the princess when the Queen confronts her, showing his care for her at full force.