According to Disney Wiki Mr. Smee is one of the most complex characters in one of Disney’s early films. Unlike previous villain sidekicks, the filmmakers felt that Smee was the first sidekick to have a truly memorable part in the story. When Walt Disney began character development on the film, animator Ollie Johnston was given the job to animate. He once said that Smee was one of his favorite characters to animate because he wasn’t just the villains’ lackey, but because he had a solid role in the story and that he was useful as a personality. This is a full and untrimmed cel of Mr. Smee set against a printed presentation background. 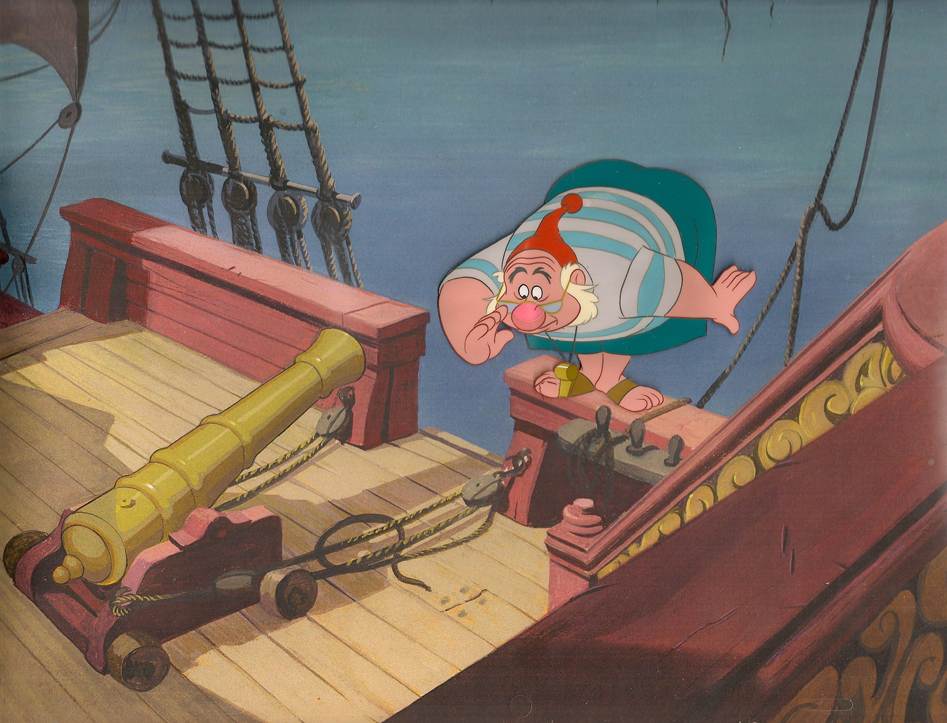 Animation Cel of Mr. Smee
Year: 1953
Studio: Disney Studios
Width of Image = 4 inches
Height of Image = 3 inches
Width of Art = 12 inches
Height of Art = 9 inches
Background: Presentation Background
Price $750
Smee was animated by one of Walt Disney’s Nine Old Men, Ollie Johnston. Smee is a diminutive, portly gentleman with an odd, hourglass-shaped head. He has shoulder-length, white hair (though the top of his head is bald) and thick, black eyebrows. His eyes are black and close-set, and they are often half-closed. His nose is round, large and pink (much like the Dwarfs from Snow White and the Seven Dwarfs), and the rest of his skin is slightly pink as well. In terms of attire, Smee wears what seem to be very simple, brown sandals, a short-sleeved shirt with alternating sky blue and white horizontal stripes, and teal shorts. He also wears half-moon glasses and a red stocking cap with a red pom-pom ornament on top.