Peter Pan was one of Walt Disney’s favorite stories and in 1935 he intended for Peter Pan to be his second film after Snow White and the Seven Dwarfs. However, he could not get the rights until four years later, after he came to an arrangement with Great Ormond Street Hospital in London, to whom J. M. Barrie had bequeathed the rights to the play. 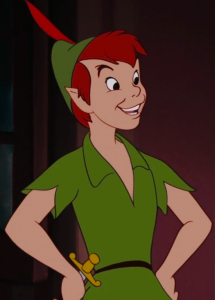 The studio started the story development and character designs in the late 1930s and early 1940s and intended it to be his fourth film, after Snow White, Bambi, and Pinocchio. World War II forced the delay of Peter Pan, along with other films.

This animation cel is a full figure and full cel of Peter flying over Neverland with the Pirate Ship below.  As we all know, Peter Pan eventually has a much-awaited showdown with Captain Hook. 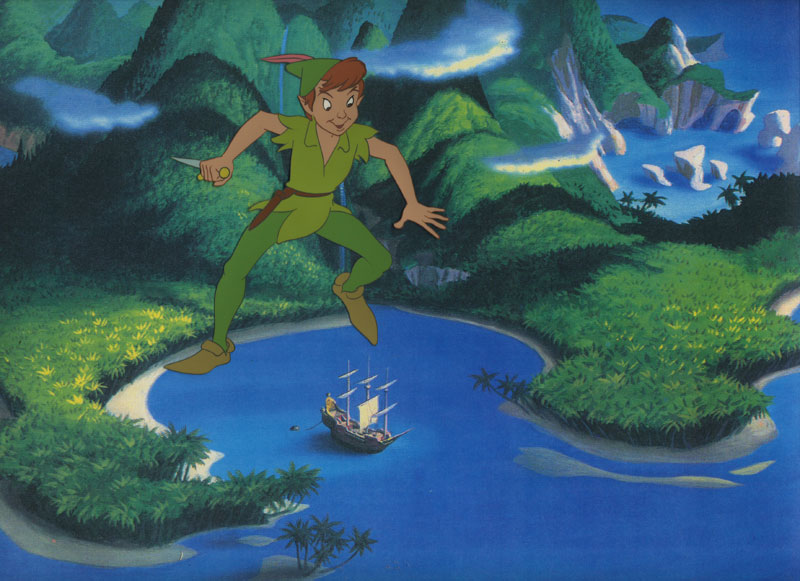 Animation Cel of Peter Pan Flying
Year: 1953
Studio: Disney Studios
Width of Image = 4.25 inches
Height of Image = 4.75 inches
Width of Art = 12.5 inches
Height of Art = 10.75 inches
Background: Presentation Background
Price $4,000
The boy who never grows up whisks the three Darling children – Wendy, John, and Michael – away to Never Land, and they embark on an adventure they’ll never forget. Never Land is full of adventures with mermaids, pixies, and crocodiles, but it’s also home to the villainous pirate Captain Hook, who’ll stop at nothing to defeat Peter and his crew of Lost Boys. It will take faith, hope, and a pinch of pixie dust, to win the day and bring the Darlings safely home. When George and Mary Darling return home from their party they find Wendy sleeping at the nursery’s open window. Wendy awakens and excitedly tells about their adventures. The parents look out the window and see what appears to be a pirate ship in the clouds. George, who has softened his position about Wendy staying in the nursery, recognizes the ship from his own childhood. Contemporary reviews remain positive. Giving the film 3+1⁄2 stars out of 4, Gene Siskel of the Chicago Tribune noted the “drawing of Tinkerbelle [sic] and the flamboyance of Captain Hook” as well as the “quality music mixed with appropriate animation” were the film’s major highlights. Peter Pan has been criticized in recent decades for its broadly stereotypical treatment of the Indians. In the song “What Made the Red Man Red?”, the Native Americans are called “Injuns” and their skin color is attributed to blushing because of being kissed by women. Marc Davis, one of the supervising animators of the film, said in an interview years after the production that “I’m not sure we would have done the Indians if we were making this movie now. And if we had we wouldn’t do them the way we did back then. Peter Pan was the final Disney animated feature released through RKO before Walt Disney founded his own distribution company, as well as the final Disney film in which all nine members of Disney’s Nine Old Men worked together as directing animators.