This delicate image of Sleeping Beauty as Briar Rose is a rare animation art cel signed by Mark Davis, Frank Thomas and Ollie Johnson. They are all considered Disney legends and they were three of what became known as Disney’s Nine Old Men. These nine were the Walt Disney Company’s core of animators. They were responsible for most of the great work done on the Disney films from the 1920’s on.

Marc Davis animated the evil Maleficent along with her pet raven Diablo, some Prince Phillip and other scenes. Davis also designed countless other Disney characters and many of the rides at Disneyland. Frank and Ollie animated the three fairies Flora, Fauna and Merryweather.

Sleeping Beauty was always comfortable and at one with the forest creatures who befriended her. 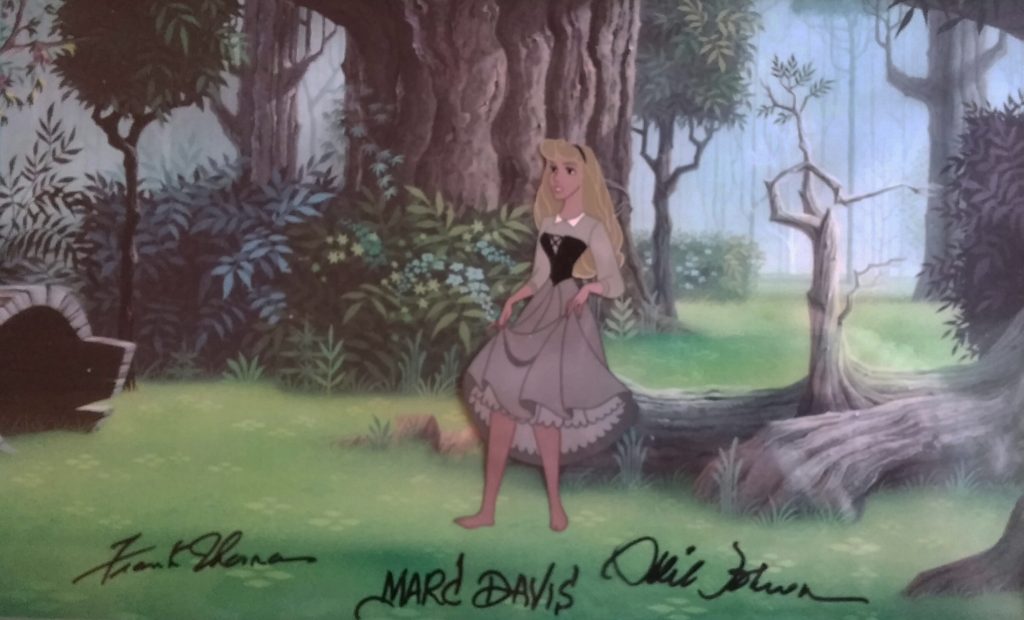 Animation Cel of Sleeping Beauty as Briar Rose signed
Year: 1959
Studio: Disney Studios
Width of Image = 2.5 inches
Height of Image = 5 inches
Width of Art = 13 inches
Height of Art = 8 inches
Background: Presentation Background
Price $5,000
In November 1950, Walt Disney officially announced he was developing Sleeping Beauty as an animated film. Disney envisioned this picture as his ultimate masterpiece, a film that he felt would be the pinnacle of his studio’s achievements in the field of animation. At the same time, he realized, if his staff returned to the fairy tale format, they couldn’t duplicate Snow White or Cinderella; it was necessary to develop new methods of storytelling to make Sleeping Beauty as special and as different as they could. As Walt told author Bob Thomas, “You’ve got a lot of elements to consider. For one thing, you fight to do something that breaks away from what we’ve done before. Sleeping Beauty was tough, because it had a lot of the elements that we had in Snow White and Cinderella. You’ve got to give the animators new things to work on to keep their enthusiasm up. All of a sudden in a meeting, one of them will say, “Haven’t we don’t this before?”—and we have, so we have to change it all over again…” After the production title was registered on January 19, 1950, Walt assigned a small team of Bill Peet, Ted Sears, and Winston Hibler to begin adapting Perrault’s tale to the style of Disney feature. A particular challenge was to increase the conflict in the plot, so the story team decided to significantly expand the role of the evil fairy; it was also decided to make her a far more powerful and sinister character, the opposite of the depiction of the old hag in the original fairy tale. The film was originally a failure and did not make up the huge cost of the film. Along with the mixed critical reception, it was also noted to be the film that caused Walt Disney to lose interest in the animation medium. However, the subsequent re-releases proved massively successful, and critics and audiences have since hailed it as a beautiful animated classic.