Walt Disney’s masterpiece, Snow White & the Seven Dwarfs can be considered the most important animated film in history. Disney risked everything financially to produce what was the first full color full length animated cartoon, which was released in 1937 by RKO Radio Pictures. This is a rare and almost perfect production Courvoisier animation cel of Snow White with the poison apple she has just accepted from the Witch.

The Queen discovers that Snow White has survived, so she uses magic to disguise herself as an old hag and creates a poisoned apple that will put anyone who eats it into a “Sleeping Death” from which only the kiss of true love will revive.

When the dwarfs are away the hag arrives at the dwarfs’ cottage and offers Snow White the poisoned apple, unbeknownst to her that it is the Queen in disguise. Snow White bites into the poison apple and falls into a coma.

Upon discovering what had happened, the dwarfs track down the Queen; a short fight ensues and the Queen is killed. Believing her dead too, the dwarfs build an open grave for Snow White to rest on. Time passes and the Prince comes across Snow White. Saddened by her apparent death, he kisses her, causing her to awaken. As the Seven Dwarfs dance with joy, Snow White and the Prince go off to live together happily ever after.

Snow White with the poison apple is one of the quintessential images in the film.

Some Snow White drawings can be quite charming

See the Witch give Snow White the poison apple 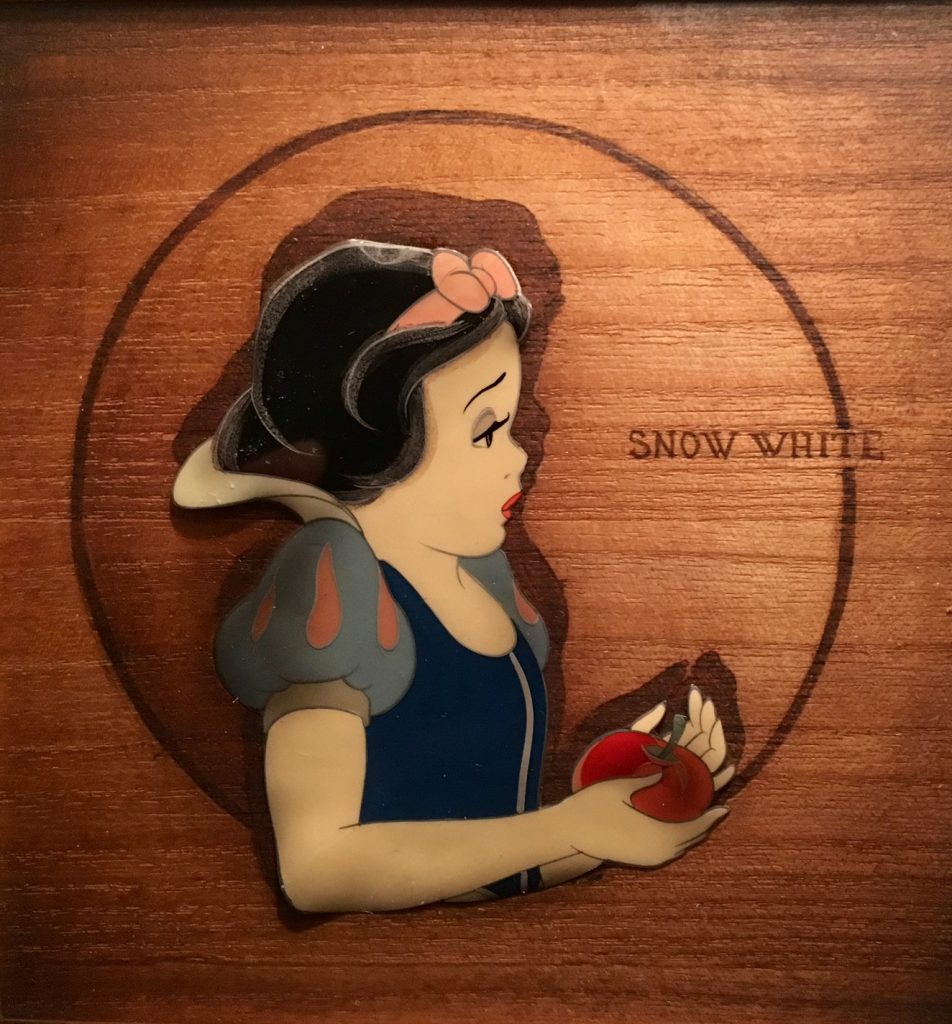 Animation Cel of Snow White with the Poison Apple
Year: 1937
Studio: Disney Studios
Width of Image = 2.75 inches
Height of Image = 3.75 inches
Width of Art = 5.25 inches
Height of Art = 5.50 inches
Price $10,000
Snow White & the Seven Dwarfs was based on the German fairy tale by the Brothers Grimm. In the film, after the Evil Queen finds out through her Magic Mirror that Snow White is still alive, she turns herself by magic into an old hag, the Witch. She then creates a poison apple which will put anyone who takes even one bite into the “Sleeping Death”. Snow White with the poison apple takes that bite immediately after the image in this animation cel.