Susie the Little Blue Coupe is an animated short film released theatrically by Walt Disney Studios on 6 June 1952. The eight-minute film was directed by Clyde Geronimi and based on an original short-story by Bill Peet. The film’s narrator was Sterling Holloway. Susie has her ups and downs going from a brand new car in the showroom, to an older model in a second-hand lot, to a skid row wreck, then ultimately restored to a new hotrod. The sweetness and beauty of this animation cel of Susie speaks for itself. 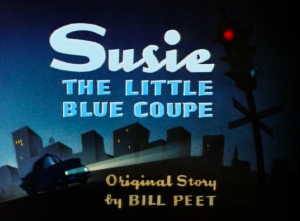 Susie the Little Blue Coupe is an anthropomorphized car created by Walt Disney Studios for the animated short with the same name. To anthropomorphize is to assign human characteristics to non human objects. Either animals, plants or inanimate objects can be used. Of course, Disney Studios, along with all other animation studios have a long history of this. Mickey Mouse, Donald Duck and Porky Pig are examples; all are animals.

Susie the Little Blue Coupe info can be found here.

Even drunken pelicans can be anthropomorphized. 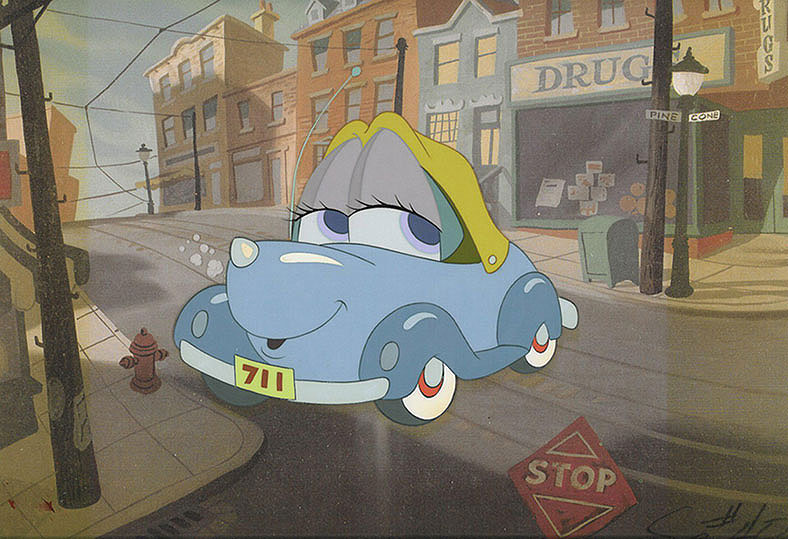 Sold – Animation Cel of Susie the Little Blue Coupe
Year: 1952
Studio: Disney Studios
Width of Image = 6.25 inches
Height of Image = 4.75 inches
Width of Art = 9.5 inches
Height of Art = 9 inches
Background: Presentation Background
Price $3,000
The production team for Susie the Blue Coupe created and used a method of anthropomorphizing the cars, using the windshield for the eyes and eyelids, which served as a stylistic inspiration for the 2006 Disney-Pixar animated feature, Cars, its 2011 sequel, Cars 2, and the TV short films A Cars Toon. Or simply put, the design was an inspiration for character design for the whole Cars franchise. Sterling Holloway, the narrator, had a long history with Waly Disney films. Holloway’s voice work in animated films began with Dumbo (1941), as the voice of Mr. Stork. Holloway was the voice of the adult Flower in Bambi (1942), the narrator of the Antarctic penguin sequence in The Three Caballeros (1944), and the narrator in the Peter and the Wolf sequence of Make Mine Music (1946). He was the voice of the Cheshire Cat in Alice in Wonderland (1951); the narrator in The Little House (1952), Susie the Little Blue Coupe (1952), and Lambert the Sheepish Lion (1952); Kaa the snake in The Jungle Book (1967); and Roquefort in The Aristocats (1970). He is perhaps best remembered as the voice of Winnie the Pooh in Disney’s Winnie the Pooh featurettes through 1977. He was honored as a Disney Legend in 1991, the first person to receive the award in the voice category. Holloway acted on many radio programs, including The Railroad Hour, The United States Steel Hour, Suspense, Lux Radio Theater, and The Shadow. In the late 1940s, he could be heard in various roles on NBC’s “Fibber McGee and Molly”. His voice retained a touch of its Southern drawl and was instantly recognizable. Holloway was chosen to narrate many children’s records, including Uncle Remus Stories (Decca), Mother Goose Nursery Rhymes (Disneyland Records), Walt Disney Presents Rudyard Kipling’s Just So Stories (Disneyland Records) and Peter And The Wolf (RCA Victor).