The Witch with the Poison Apple

When the Queen turns into the Witch with the poison apple it is one of the most dramatic scenes in the film. 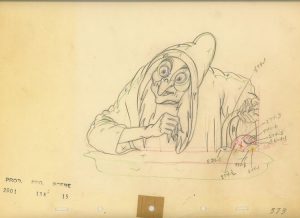 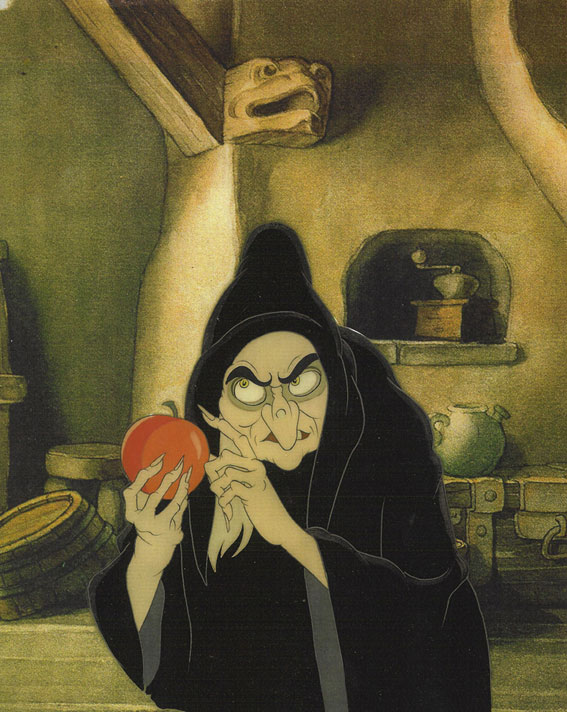 Sold – Animation Cel of the Witch with the Poison Apple
Year: 1937
Studio: Disney Studios
Width of Image = 6.5 inches
Height of Image = 7.00 inches
Width of Art = 7.75 inches
Height of Art = 10 inches
Background: Presentation Background
After poisoning Snow White the Witch is pursued by the dwarfs and falls off of a cliff to her death. This particular animation cel of the Witch has been published and appears in the book Walt Disney’s Snow White and the Seven Dwarfs – An Art in the Making. The book features a large collection of animation art that was used in the production of the film. The Queen is an icily beautiful woman with a serene, unfeeling face and a slender figure. She has pale skin, red lips, green eyes, and seemingly penciled-on eyebrows. Her transformation into her witch disguise heavily suggested that she has long, chest-length black hair. Her features and her royal attire create a stunning Queenly image. The Queen is seen wearing a purple gown with long sleeves and a red rope belt tied around her waist. She wears a black balaclava covering her ears, neck, and hair, leaving her face exposed. The Queen wears a long black cloak that appears to be part of the cowl. The cloak is lined with red inside, and the bottom of the cloak is lined with white fur. She has a high white collar attached to her cloak. She also wears a golden pendant that seems to connect with the collar. She also wears orange-yellow high-heel pumps. To top off her royal appearance, the Evil Queen wears a golden crown atop her head with 5 spikes on the front and a jewel on the tip of the middle and tallest spike. The color scheme of her attire represents her pride and vanity. In her witch disguise, the Queen’s physical appearance changes from that of a youthfully beautiful queen with an unfeeling look on her face to an ugly, old peddler vividly displaying emotions. She has long, chest-length white hair, thick eyebrows, the same green eyes from her normal form, and dark rings around her eyes. Her nose becomes long and crooked with a large wart, and she only has one visible tooth on her bottom jaw. Her hands are gnarled and have pointed, dirty fingernails. She dons a black, cowled robe that retains the hanging sleeves of her gown. She also seems to wear gray slippers.