Production background included. Peter Pan is another full length animated film produced by Walt Disney. It is based on the play Peter Pan, or The Boy Who Wouldn’t Grow Up by J. M. Barrie and was originally released on February 5, 1953 by RKO Pictures. Peter Pan is the final Disney animated feature released through RKO before Walt Disney’s founding of his own distribution company, Buena Vista Distribution, later in 1953 after the film was released. Peter Pan is also the final Disney film in which all nine members of Disney’s Nine Old Men worked together as directing animators.

This is a very large production set-up , with cels of Peter, Hook wrapped in the flag, and the rigging, along with a beautiful watercolor production background of the deck of the pirate ship, including cannonballs and more rigging.

A 16- field animation production background is quite rare and desirable. The Peter Pan final showdown with Captain Hookis the stirring climax of the film. This fantastic combination makes this piece a true icon. 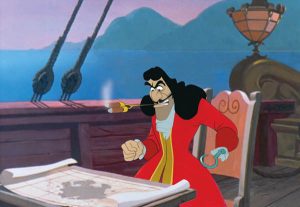 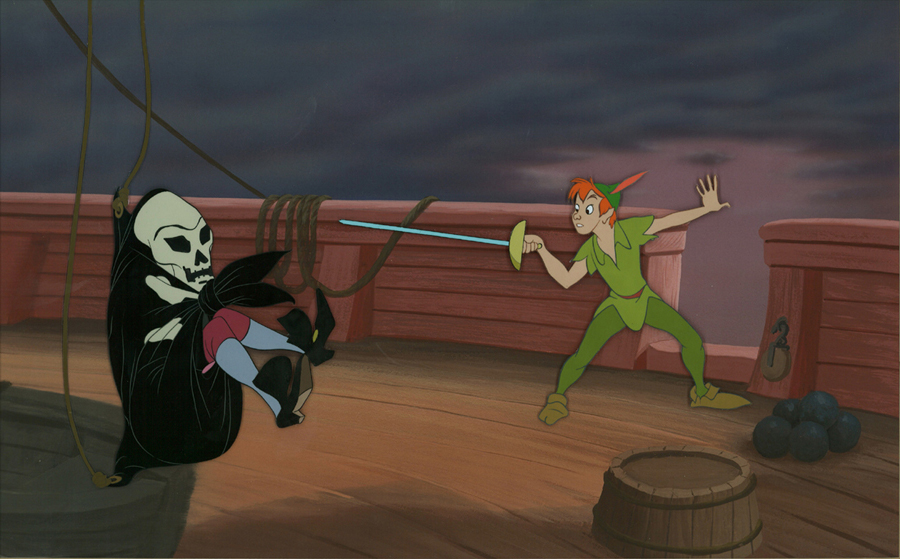 Animation Cels and Production Background of Peter Pan & Captain Hook
Year: 1953
Studio: Disney Studios
Width of Image = 12.5 inches
Height of Image = 9.5 inches
Width of Art = 17 inches
Height of Art = 11.25 inches
Background: Production Background
Price $25,000
An earlier story idea involved Peter’s birth and how he came to be. When he was an infant, fairies entered his home and took him away to Neverland. When Peter returned, he discovered another baby in his mother’s bed. Feeling rejected and forgotten, Peter left and returned to Neverland – now his home. Eventually, Peter met Tinker Bell and gathered a group of younger kids and created the Lost Boys Peter Pan is incredibly adventurous and daring. His favorite activities include battling pirates, engaging in friendly wars with the Indians, and listening to Wendy’s stories of his adventures. Being a young boy, Peter can be rather impractical and conceited at times, but when it comes to rescue his friends, he is far more mature than any adult can be. He is respected and loved by nearly every inhabitant of Never Land, with the exception of Captain Hook (and his crew), who despises Peter for cutting off his left hand and feeding it to Tick-Tock the Crocodile during their first battle. At the end of the film, Peter Pan and Tinkerbell confront the pirates and rescue the Darling children. Peter and Captain Hook engage in a mano a mano fight, and at the climax, Peter cuts the rigging and traps Hook in his own Jolly Roger flag. This is a very large production set-up , with cels of Peter, Hook wrapped in the flag, and the rigging, along with a beautiful watercolor production background of the deck of the pirate ship, including cannonballs and more rigging.