Lady and the Tramp is a full length animated film produced by Walt Disney and released to theaters on June 22, 1955, by Buena Vista Distribution. It was the first animated feature filmed in the CinemaScope widescreen film process. The story centers on a female American Cocker Spaniel named Lady who lives with a refined, upper middle-class family, and a male stray mutt called the Tramp. 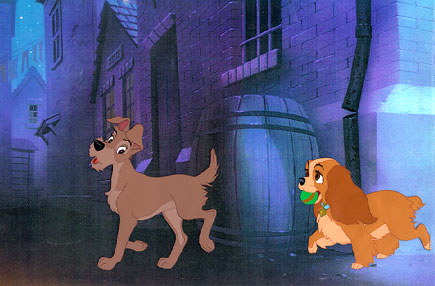 Lady and the Tramp

Animation Cels of Lady and the Tramp
Year: 1955
Studio: Disney Studios
Width of Image = 10 inches
Height of Image = 4.5 inches
Width of Art = 13.25 inches
Height of Art = 9.25 inches
Background: Presentation Background
Price $3,500
In 1937 Disney story man Joe Grant came up with an idea inspired by the antics of his of his Springer Spaniel Lady, and how she got “shoved aside” by Joe’s new baby. He approached Walt Disney with sketches of Lady. Disney enjoyed the sketches and commissioned Grant to start story development on a new animated feature Lady. In the early 1940’s Walt read a short story written by Ward Greene, “Happy Dan, The Whistling Dog”, in Cosmopolitan Magazine. He thought Grant’s story would be improved if Lady fall in love with a cynical dog character like the one in Greene’s story, and bought the rights to it.