The Brave Little Tailor was produced by Walt Disney and released in 1938 by RKO Radio Pictures. It is an adaptation of the fairy tale  The Valiant Little Tailor with Mickey Mouse in the title role. It was directed by Bill Roberts and features original music by Albert Hay Malotte.

The voice cast includes Walt Disney Mickey, Marcellite Garner as Minnie, and Eddie Holden as the Giant. It was the 103rd short in the Mickey Mouse film series. When Mickey Mouse boasts of killing seven with one blow, the townspeople believe he is referring to giants, not the seven flies that Mickey is talking about.

The King then promises to give Mickey Mouse both vast riches and the hand of his daughter Princess Minnie if Mickey can kill the giant who is terrorizing the kingdom. This animation art cel is a beautiful image of the future couple.

You can see Mickey Mouse in The Brave Little Tailor here

Don’t miss our other happy couple. 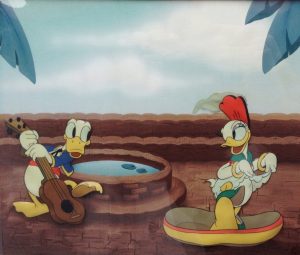 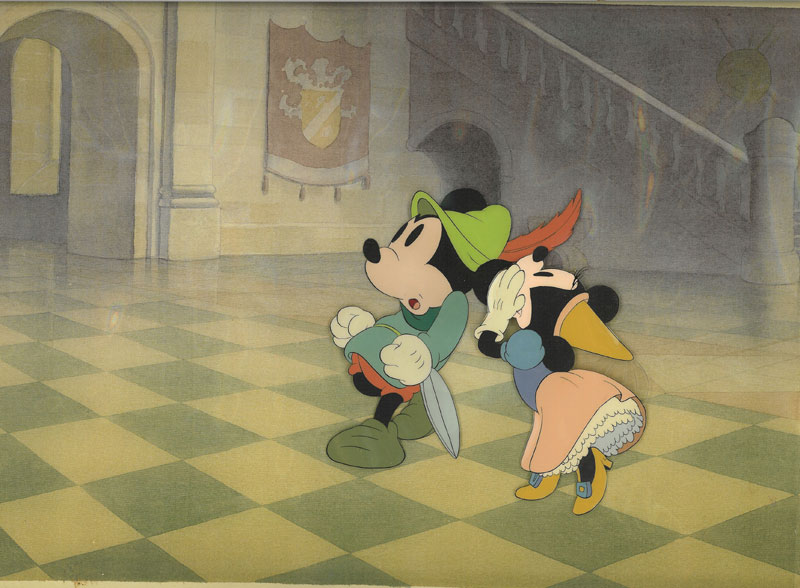 Animation Cels of Mickey Mouse and Minnie Mouse
Year: 1938
Studio: Disney Studios
Width of Image = 4.75 inches
Height of Image = 5 inches
Width of Art = 10.75 inches
Height of Art = 8.25 inches
Background: Presentation Background
Price $8,000
The King appoints Mickey Mouse “Royal High Killer of the Giant”. Mickey must now reluctantly live up to his title. The Brave Little Tailor was nominated for the Academy Award for Best Animated Short Film at the 11th Academy Awards in 1939 but lost to Disney’s own Ferdinand the Bull. In 1994 the film was chosen as the 26th greatest cartoon of all time by members of the animation field. The list was compiled in the book The 50 Greatest Cartoons. Some of Mickey’s dialogue from this short would later be reused in other materials. The line “Well, so long! I’ll be seeing ya!” was reused in Fantasia after Mickey shakes hands with Leopold Stokowski. Mickey’s big sneeze and the nervous response of “Gesundheit. Heh.” was reused in the Mickey and the Beanstalk segment of Fun and Fancy Free released years later. The sound used for Minnie whispering to the King is the same one that was used for the knight whispering to the King. However, it could be implied that she whispered to the king, “Please, daddy, let me marry him if he kills the giant.”, as evidenced in the subtitles on the 2000 Gold Classic release of The Sword in the Stone. In the Mickey Mouse Works short “Mickey’s April Fools”, Mickey imitates this role to prove to a lawyer that he is the real star along with some of his other past roles. A comic adaptation of the cartoon ran in the Mickey Mouse Sunday newspaper comic strip from August 28 through November 27, 1938. The comic included a framing device between the beginning and end of the cartoon’s story. The opening strips had Mickey receiving a phone call from Walt Disney about the film, and then meeting the director to pick up his script. Goofy also appears in the framing device, telling Mickey that the studio’s giving him a different picture to film, figuring they probably didn’t want him stealing Mickey’s spotlight. After the cartoon is filmed, Mickey meets up with Goofy (who’s in his outfit from The Whalers) again and invites him over to his house to play badminton.