Pinocchio is a 1940 full length animated film produced by Walt Disney and based on the story The Adventures of Pinocchio by Carlo Collodi. It is the second full length animated feature produced by Walt Disney, and was made after the success of Snow White and the Seven Dwarfs. It was released to theaters with great acclaim by RKO Radio Pictures on February 7, 1940. This production animation cel of Pinocchio and Figaro was released through Courvoisier Galleries. 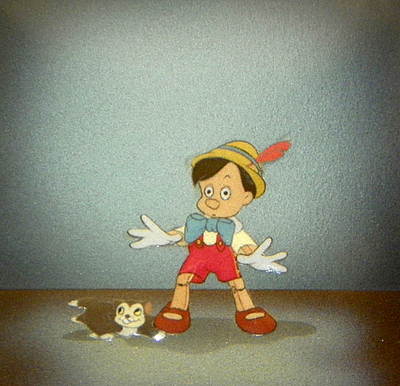 Animation Cels of Pinocchio and Figaro
Year: 1940
Studio: Disney Studios
Width of Image = 2.5 inches
Height of Image = 2.25 inches
Width of Art = 4.5 inches
Height of Art = 4.5 inches
Background: Courvoisier Background
Price $2,900
An old wood-carver named Geppetto carves a wooden puppet named Pinocchio who is brought to life by the Blue Fairy. She tells Pinocchio that he can become a real boy if he proves himself “brave, truthful, and unselfish”. Pinocchio won two Academy Awards, one for Best Original Score and one for Best Original Song for the song “When You Wish Upon a Star”.