Bambi animation cel with Thumper on ice is one of the most beloved sequences in the film. Bambi and Thumper were lifelong friends. 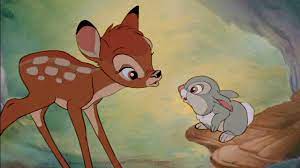 Released through Courvoisier Galleries this Bambi animation cel is mounted to an airbrush and watercolor Courvoisier background.

Bambi is a full length animated film produced by Walt Disney and released on August 13, 1942, by RKO Radio Pictures. Bambi is the fifth animated feature film produced by Walt Disney Studios, directed by David Hand (supervising a team of sequence directors), and based on the book Bambi, A Life in the Woods by Austrian author Felix Salten. In 2008 the American Film Institute rated Bambi the third best American animated feature film.

Although the animators had animated deer in Snow White, they were animated, in the words of Eric Larsen “like big flour sacks”. Disney wanted the animals in Bambi to be more realistic and expressive than those in Snow White. He had Rico LeBrun, a painter of animals, come and lecture to the animators on the structure and movement of animals. The animators visited the Los Angeles Zoo and Disney set up a small zoo at the studio with animals such as rabbits, ducks, owls, and skunks, and a pair of fawns named Bambi and Faline so that the artists could see first-hand the movement of these animals. Rico LeBurn’s sketches depicted realistic animals, but as characters they lacked personality. Marc Davis created the final design of Bambi by incorporating LeBurn’s realistic study of deer anatomy but exaggerating the character’s face by making his proportions baby-like (short snout, big eyes, etc.) 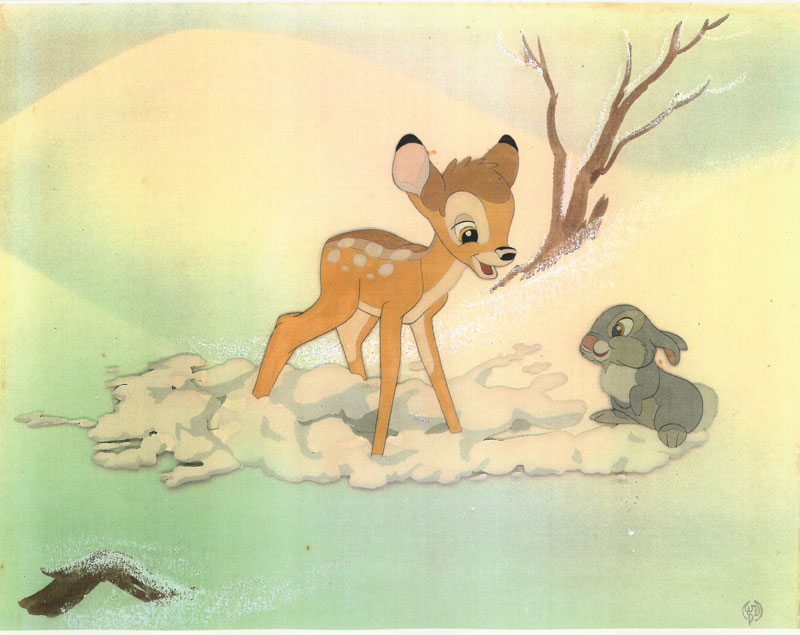 Bambi Animation Cel of Bambi and Thumper On Ice
Year: 1942
Studio: Disney Studios
Width of Image = 8.5 inches
Height of Image = 4 inches
Width of Art = 10 inches
Height of Art = 7.5 inches
Background: Courvoisier Background
Price $7,500
Bambi’s friends growing up are Thumper the rabbit, Flower the skunk, and Faline, who becomes Bambi’s mate when they reach adulthood. In one of the most beloved sequences in the film, Bambi and Thumper frolic on a frozen pond. Animation cels from that sequence are quite rare, and this Bambi animation cel is a gorgeous example of the exuberance the two young animals. As the months go by, Bambi creates bonds with Thumper and a bashful skunk by the name of Flower, forming a strong trio. He also builds a weak friendship with Faline, a fawn who he fell in love with, despite being disgusted by her at first glance because of her overly bubbly personality. Aside from friendships and romance, Bambi’s primary concern is his mother, who he loves deeply, often learning life lessons that stick with the young prince. One of those lessons involves being conscious of “Man”; the forest’s most feared enemy. Man is known for being a ruthless hunter, killing animals for the sake of the sport, having no regard for anything else, not even the animals’ lives or if they have family. One day, while out during his first winter, Bambi’s mother is killed by Man; though the young fawn manages to escape before he falls victim, as well. Without his mother to care for him, the Great Prince of the Forest arrives and decides to raise Bambi himself, tragically confessing the loss of his mother and taking him from his old home.