Why is a raven like a writing desk? This fantastic painting by Mary Blair used to inspire other Disney artists was done of course for Alice in Wonderland, the film in which Mary Blair had the most effect in the style and color. You can almost feel the happy insanity of this classic scene with the Mad Hatter and Alice herself. And a very happy un-birthday to you.

Mary Blair was born in 1911 in Oklahoma. She began her career as a well-received fine art watercolorist, but soon moved to working in the animation industry, most notably for Walt Disney Studios. Her art was a great favorite of Walt’s.

Mary Blair worked on concept art for Saludos Amigos and the Three Caballeros, and was credited as art supervisor. She is most famous for the wonderful concept art she did for Alice in Wonderland, Peter Pan, and Cinderella. She was credited in these films as color stylist. Walt Disney loved her sense of color styling, and asked her to help design the Disney exhibit and ride “It’s a Small World” in the 1960’s.

She also designed the 90 foot high mural which is in the lobby of Disney’s Contemporary Resort at Walt Disney World which opened in 1971. Through four different decades her artistic vision and color styling were a large part of many of the most beloved creations of the Walt Disney Company.

You can read more about Mary Blair here. 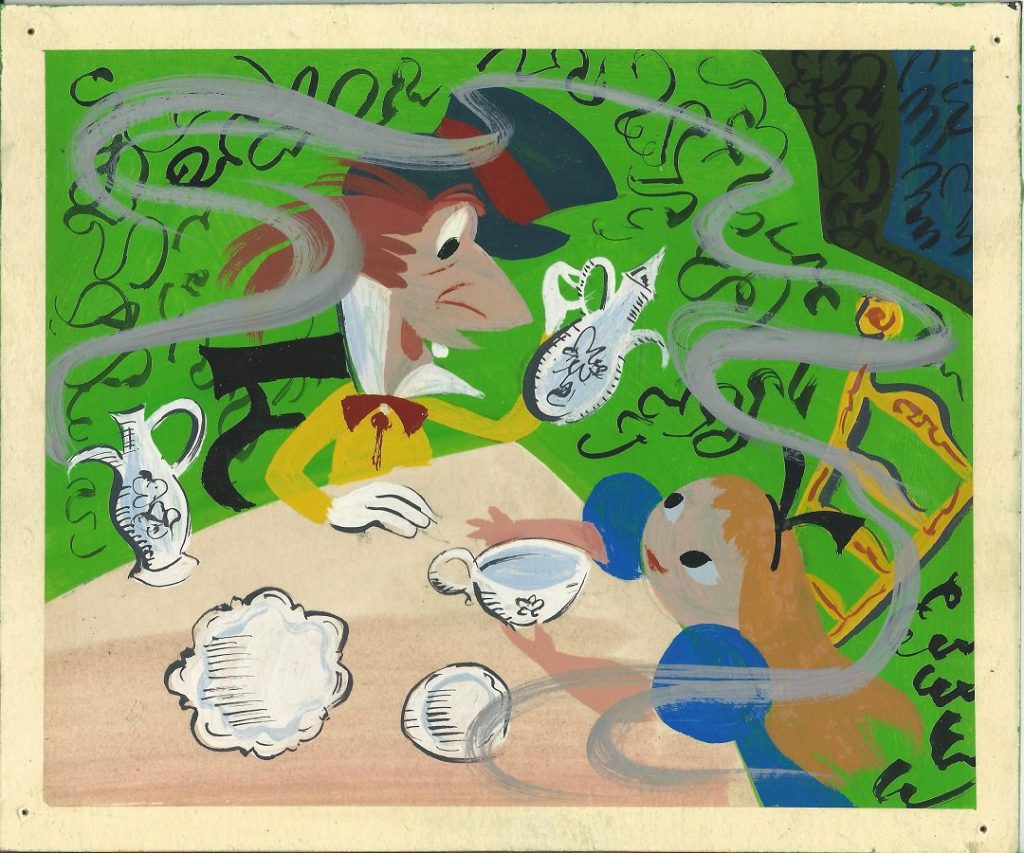 Sold – Concept art painting of Mad Tea Party by Mary Blair Alice in Wonderland
Year: 1951
Studio: Disney Studios
Width of Image = 9.75 inches
Height of Image = 9.75 inches
Width of Art = 9.75 inches
Height of Art = 9.75 inches
Price $old $15,000
According to cartoon historian John Canemaker “It would be difficult for anyone not to enjoy the witty, utterly charming art of Mary Blair, a dazzling and prolific sorceress of color and form. She saw the world in a fresh, new way and brought a special childlike beauty and gaiety to the works of print, theme parks and movies.” He is so right, and her influence on Walt Disney spanned decades. She is a true Disney cartoon legend.