This Donald Duck animation cel is from Don Donald; a 1937 American animated short film produced by Walt Disney Productions and released by United Artists. The cartoon follows Donald Duck attempting to woo a female Mexican duck named Donna, played of course by Daisy Duck (although there is some serious cartoon controversy whether or not Donna is an early version of Daisy Duck as recognized by the Internet Movie Database or a rival of Daisy’s).

The cartoon takes place in Mexico and tells the story of Don Donald going to greet his girlfriend, Donna. Donald rides a donkey and lets Donna also ride it, but unfortunately, Donna hates the animal. Angered at blowing his chances with Donna, Donald Duck gets angry at his donkey and calls it a mean name before seeing a flashy new red car on sale.

With that, Donald trades in his burro for the new car. Donna loves the new car — until it breaks down in the middle of nowhere. She leaves Donald, who is left with nothing but a shrunken sombrero. The donkey, having returned on the scene, has the last laugh. 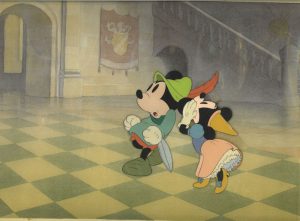 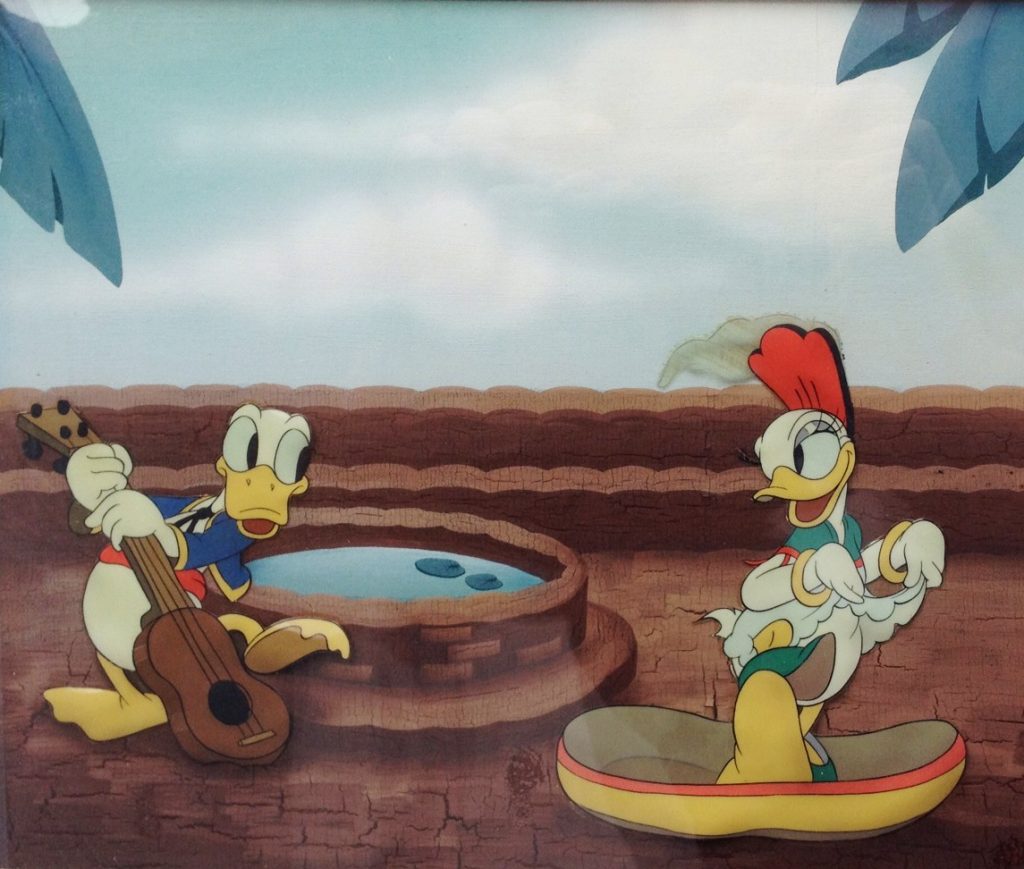 Animation Cels of Donald Duck & Daisy Duck with Guitar and Sombrero
Year: 1937
Studio: Disney Studios
Width of Image = 8 inches
Height of Image = 4.5 inches
Width of Art = 9 inches
Height of Art = 7.5 inches
Background: Courvoisier Background
Price $8,000
This is a wonderful Courvoisier Donald Duck animation cel and extremely detailed Courvoisier background of Donald playing his guitar while Donna does the Mexican Hat Dance. Many Walt Disney cartoons took place in Mexico and other south of the border countries. Although billed at the time as another Mickey Mouse cartoon, explaining the face of Mickey Mouse at the beginning, the film is actually the first installment of the Donald Duck series and is the first to feature Donald as the primary starring character. It was directed by Ben Sharpsteen and Clarence Nash voiced both Donald and Donna. This short was originally conceived as a Silly Symphony entitled “The Little Burro”. The plot was nearly identical to the final version, except the protagonists were a nameless Mexican boy and girl who would have come to regret trading their burro for the car and thus, joyously reunited with him in the end.