This Disney animation cel of the hookah-smoking Caterpillar is one of the hippest characters in Alice in Wonderland. He spends his time sitting on a magic mushroom, smoking his hookah, and contemplating. Remember what the Doormouse said! Alice has shrunken down to a size too small for her liking. After asking Alice exactly who she is (in words and in smoke) he then instructs her to eat a part of his mushroom grow back to her original size. The Caterpillar is voiced by Richard Haydn.

Alice’s Adventures in Wonderland, was a widely beloved British children’s book by Lewis Carroll published in 1865. With its fantastical tales and riddles it became one of the most popular works of English-language fiction. It was notably illustrated by British artist John Tenniel.

Disney animation cels from Alice in Wonderland give collectors a chance to amass multiple fantastic and different characters.

They are the Red Queen’s Army. 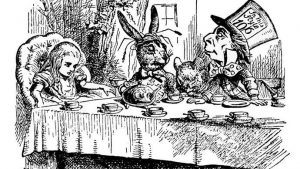 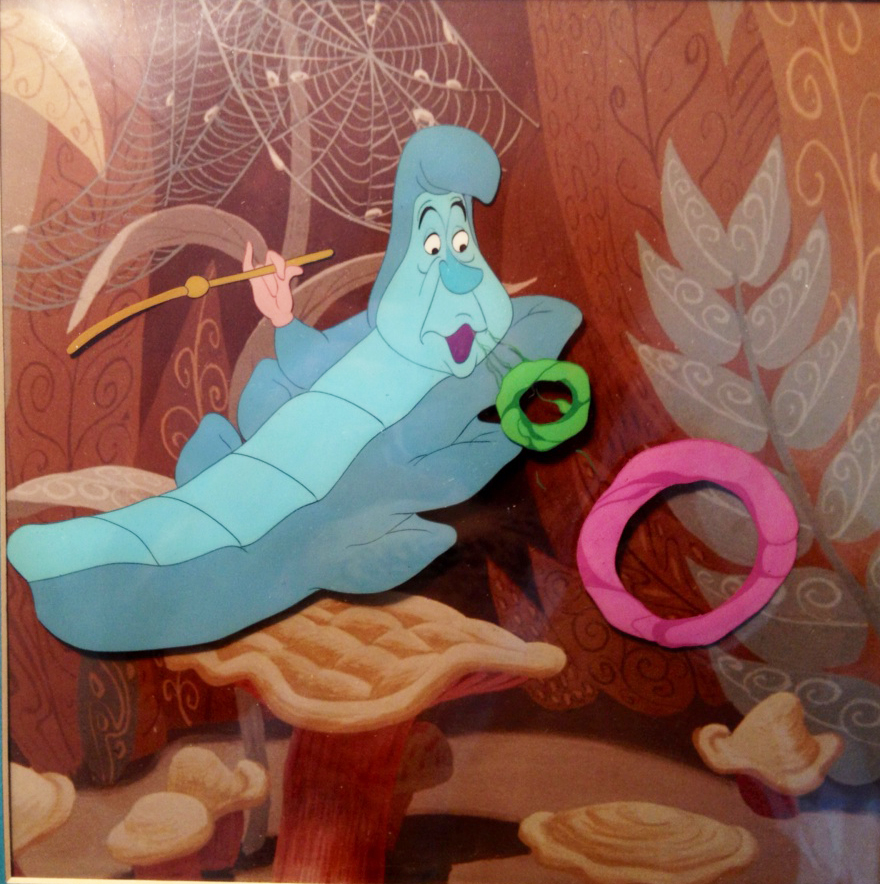 Disney Animation Cel of the Caterpillar
Year: 1951
Studio: Disney Studios
Width of Image = 8.5 inches
Height of Image = 6 inches
Width of Art = 9.5 inches
Height of Art = 9.5 inches
Background: Presentation Background
The Caterpillar often over-enunciates certain words such as ‘exactly’ and ‘correctly’. He has a passion for recitation and grammar, and unlike most of the residents of Wonderland, he appears more calm and collected and was one of the few willing to give Alice useful advice. Disney animation cel depicts the caterpillar with a rather short temper, which can easily be set off if his height is mocked or someone fails to understand his hints. He appears to have rather poor memory, as he did not recall who Alice was during their second meeting. The Caterpillar and Alice looked at each other for some time in silence: at last the Caterpillar took the hookah out of its mouth, and addressed her in a languid, sleepy voice. ‘Who are YOU?’ said the Caterpillar. The author of Alice in Wonderland, Lewis Carroll was also a famous mathematician of his time. He matriculated at Oxford in May 1850, and in 1852 he obtained first class honours in Mathematics Moderations. His talent as a mathematician won him the Christ Church Mathematical Lectureship in 1855, which he continued to hold for the next twenty-six years. He based the character of Alice on the Dean Henry Liddell’s daughter Alice Pleasance Liddell. The film was considered a disappointment on its initial release, leading to Walt Disney showing it on television as one of the first episodes of his TV series Disneyland. It proved to be very successful on television. It was eventually re-released in theaters which proved to be massively successful. The film became even more successful through merchandising and subsequent home video releases. While the film was critically panned on its initial release, it has since been regarded as one of Disney’s greatest animated classics, notably one of the biggest cult classics in the animation medium, as well as the best film adaptation of Alice.