The main character is Jumbo Jr., a newborn elephant who is cruelly nicknamed “Dumbo”. He is ridiculed for his big ears, but in fact, he is capable of flying by using his ears as wings.

Dumbo has the personality of a small child. He is playful, innocent, fun-loving, loves being around his mother, and hates being alone. He is somewhat naïve, as he did not realize Smitty and his gang were taunting him or that the “magic feather” was simply a way of thinking. Dumbo is also very easily scared, evidenced by his encounters with the clowns, the pink elephants, and, like all elephants, Timothy Mouse.  However, he is also very open-hearted, such as with Timothy and the crows, and never seemed to express any true anger or resentment toward those who tease him.

Timothy, a mouse that travels with the circus, befriends Dumbo and decides to make him a star. At just 64 minutes, Dumbo is one of the shortest features ever within the official Walt Disney animated classics canon.

This Dumbo animation cel includes him holding his D flag in his trunk. 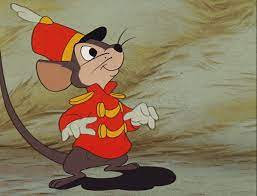 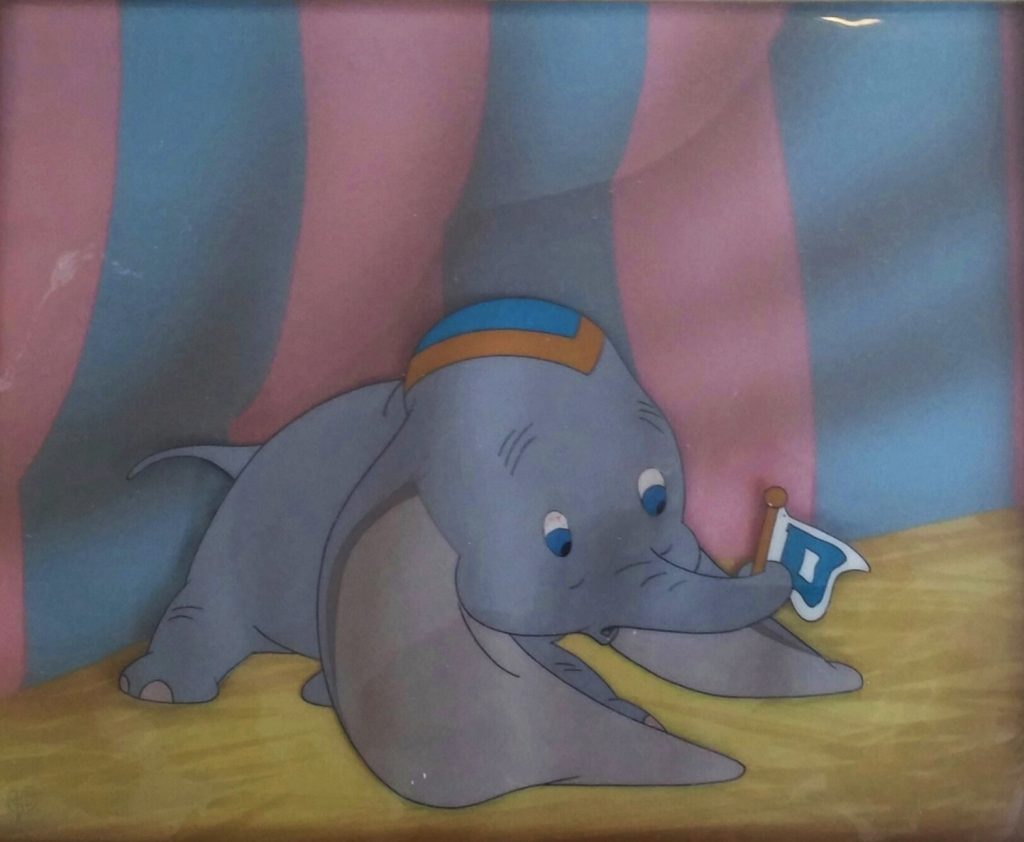 Animation Cel of Dumbo and His Flag
Year: 1941
Studio: Disney Studios
Width of Image = 7 inches
Height of Image = 4.5 inches
Width of Art = 9.5 inches
Height of Art = 7.5 inches
Background: Courvoisier Background
Price $7,500
Dumbo animation cels in good condition are rare because ingredients used in the grey paint were needed for WWII. Dumbo is a small Asian elephant. His skin is gray, his eyes are blue, and his tail is very small. His ears are very large (which the other elephants don’t like), but he uses them to fly. He has a small proboscis with two large nostrils at the end of it. Dumbo wears a small yellow conical hat, which Timothy uses as a seat to ride the elephant standing inside the brim, and a red clown collar with a yellow central stripe. At the climax of the film, Dumbo must perform his flight (using his ears of course) after jumping from a high platform. He begins to fall but is inspired by his best friend Timothy the Mouse. Dumbo is able to pull out of the dive and flies around the circus, finally striking back at his tormentors as the stunned audience looks on in amazement. After this performance, Dumbo becomes a media sensation, Timothy becomes his manager, and Dumbo and Mrs. Jumbo are given a private car on the circus train.