With story direction by Joe Grant and Dick Huemer, and production supervision by Ben Sharpsteen, it was the third feature in the Disney animated features canon and stands out from every other Disney film by its fantastic concept and originality. The film consists of eight animated segments set to pieces of classical music conducted by Leopold Stokowski; seven of which are performed by the Philadelphia Orchestra. Music critic and composer Deems Taylor acts as the film’s Master of Ceremonies, who introduces each segment in live action interstitial scenes. 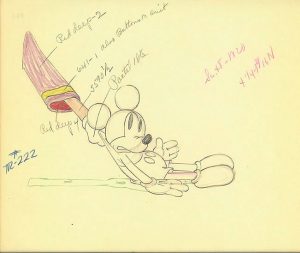 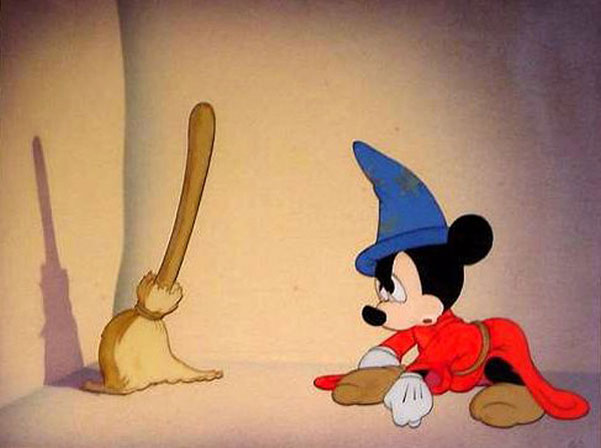 Animation Cel of Sorcerer’s Apprentice and Broom
Year: 1940
Studio: Disney Studios
Width of Image = 9.25 inches
Height of Image = 6 inches
Width of Art = 11.25 inches
Height of Art = 8.75 inches
Background: Courvoisier Background
Price $27,000
Walt Disney settled on the concept of the film Fantasia just as work neared completion on The Sorcerer’s Apprentice. The Sorcerer’s Apprentice was an elaborate Silly Symphonies short designed as a comeback role for Mickey Mouse who had declined in popularity. As production costs grew higher than what it could earn, Disney decided to include the short in Fantasia with other segments set to classical pieces. A decision that led to Mickey Mouse in probably his most famous and enduring role. The Sorcerer himself, Yensid, is of course Disney spelled backward. In myth and fantasy settings, magic is the practice of supernatural powers that encompasses many different sorts of activities, including astrology, divination, spell casting, and spirit communication. It is also often referred to as Sorcery, Witchcraft, and Wizardry. It includes the practices of many cultures, nations and religions as well as many books and writings from ancient times. Depending upon the individual, some witches practice their power by certain belief systems, such as Druidism, Shamanism, Voodoo or any number of other magical practices from countries and cultures across the Earth. Although the majority of sorcerers are commonly portrayed as being kind and selfless humans who use their powers to maintain balance within the world, even using their powers to help others; as with in myth and fiction, it has been proven by multiple characters, time and again, that some sorcerers are independent thinkers who may go against the natural order by practicing their powers for dark and sinister deeds.