In 1951 Eyvind Earle joined Disney as an assistant background painter and received credit for the experimental background painting in the Goofy short, For Whom the Bulls Toil. In 1953 he created the look of Toot, Whistle, Plunk and Boom, a short animated film which won an Academy Award and a Cannes Film Festival Award. Eyvind Earle also worked on Peter Pan, Working for Peanuts, Pigs is Pigs, Paul Bunyan, and Lady and the Tramp. He reached his Disney peak in Sleeping Beauty. 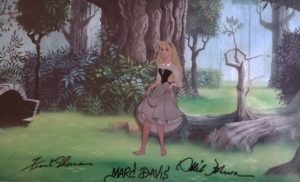 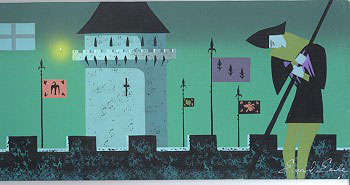 Sleeping Beauty Concept Art Painting by Eyvind Earle
Year: 1959
Studio: Disney Studios
Width of Image = 14.5 inches
Height of Image = 5.75 inches
Width of Art = 14.5 inches
Height of Art = 5.75 inches
Price $8,000
Eyvind Earle was born in 1916 in New York City. He had a long and distinguished 60 year career as a contemporary artist, author, and illustrator, most famous for his prints and original watercolor landscapes. His contemporary art is in the permanent collection of many museums, including the Metropolitan Museum of Art in New York City. From the time of his first one-man showing in France when he was 14, Earle’s fame had grown steadily. At the age of 21, Earle bicycled across country from Hollywood to New York, paying his way by painting 42 watercolors. In 1937, he opened at the Charles Morgan Galleries, his first of many one-man shows in New York. Two years later at his third consecutive showing at the gallery, the response to his work was so positive that the exhibition sold out and the Metropolitan Museum of Art purchased one of his paintings for their permanent collection. In the 1950’s Eyvand Earle worked for Walt Disney Studios as color stylist and production designer on films including Peter Pan, Lady and the Tramp, and most notably Sleeping Beauty. The incredible concept art he did for Sleeping Beauty created the look and style of the entire film. He also painted many of the production backgrounds shot and used in the film. Earle’s career has encompassed many different fields. In addition to book illustrating, the artist had also designed a number of covers for magazine publications and had produced and created several animated commercials and specials for television.In 1998, at its Annie Awards show in Glendale, the International Animated Film Society gave Earle its Windsor McCay Award for lifetime achievement. After about 15 years creating animated art, Earle returned to painting full time in 1966 and kept working until the end of his life. In addition to his watercolors, oils, sculptures, drawings and scratchboards, in 1974 he began making limited edition serigraphs. Eyvind Earle had a totally original perception of landscape. He successfully synthesizes seemingly incongruent aspects into a singularly distinctive style: a style, which is at once mysterious, primitive, disciplined, moody and nostalgic. He captures the grandeur of simplicity of the American countryside, and represents these glimpses of the American scene with a direct lyric ardor. His landscapes are remarkable for their suggestion of distances, landmasses and weather moods. “For 70 years,” Earle wrote in 1996, “I’ve painted paintings, and I’m constantly and everlastingly overwhelmed at the stupendous infinity of Nature. Wherever I turn and look, there I see creation. Art is creating…Art is the search for truth.” Eyvind Earle passed away on July 20, 2000 at the age of 84. During his lifetime he created many paintings, sculptures, scratchboards, watercolors and drawings that have not been publicly seen or exhibited.