Snow White & the Seven Dwarfs was Walt Disney’s first full color full length animated cartoon and was released in 1937 by RKO Radio Pictures. This is a rare and perfect production animation Snow White cel looking absolutely gorgeous at the well. The watercolor presentation background is an incredible recreation of the original background from the film by former Disney artist Toby Bluth. Because it is the first, Snow White cels are some of the most desirable.

This is the scene

Snow White premiered at the Carthay Circle Theatre in Los Angeles, California on December 21, 1937. It was a critical and commercial success and, with international earnings of more than $8 million during its initial release, (compared to its $1.5 million budget), it briefly held the record of highest-grossing sound film at the time. The popularity of the film has led to its being re-released theatrically many times.

This Snow White cel is the Evil Queen 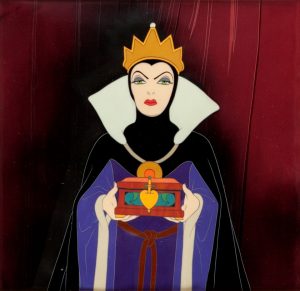 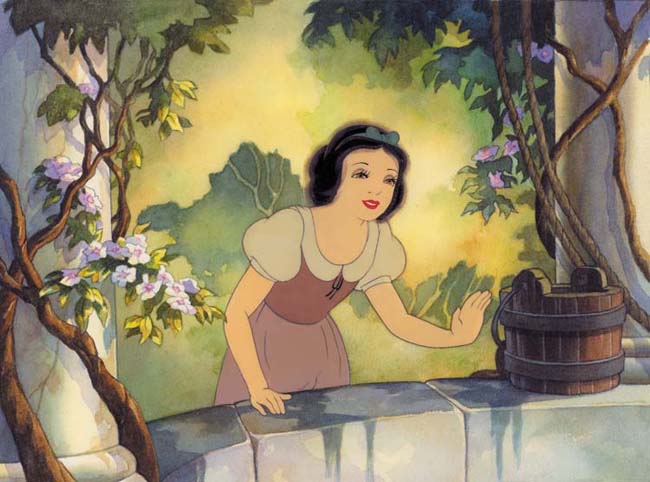 Cel of Snow White at the Well
Year: 1937
Width of Image = 5.00 inches
Height of Image = 5.50 inches
Width of Art = 11.50 inches
Height of Art = 8.50 inches
Price $8,500
Fred “Toby” Bluth was an American illustrator who worked on many Disney films and others as animator, background artist and production designer. Bluth’s artwork is prominently displayed at most of the Disney theme parks around the world. His background here really augments the fantastic Snow White cel. He is the younger brother of Don Bluth, who he has collaborated on both theater and animation. When asked how he approached each of his watercolor masterpieces, Toby described his intent as, “Creating the moment that you think you saw . . . How one remembers a film is often different from the actual film itself.” Animators’ initial sketches for Snow White’s character, some of which bore a resemblance to Betty Boop, did not meet Walt Disney’s expectations, as they were too cartoonish. Hamilton Luske, whom Disney had selected as the supervising animator for Snow White’s character, was tasked with the challenge of making Snow White more believably human and realistic than any of the Disney studio’s previous animated characters. This was a challenge Luske and co-animator Les Clark had previously been asked to explore while developing the character of Persephone for the Silly Symphonies animated short The Goddess of Spring. Of that project, Les Clark later remarked, “I’m sure Walt was thinking ahead to Snow White.” Though the Persephone character ended up appearing somewhat lifeless and devoid of personality, that experiment in imitating realistic human movement and anatomy was continued and its lessons were applied in the development of Snow White’s animation techniques. Snow White and the Queen were refined by Grim Natwick and Norm Ferguson, who would often override Walt Disney’s instructions. The final character gave us the prototype for countless other beautiful heroines and this Snow White cel started it all.