Aladdin and His Wonderful Lamp is a two-reel animated cartoon short subject in the Popeye Color Specials series, produced in Technicolor and released to theatres on April 7, 1939 by Paramount Pictures. It was produced by Max and directed by Dave Fleischer for Fleischer Studios, Inc., with David Tendlar serving as head animator, and music being supervised by Sammy Timberg. Production cels from this film are quite rare, especially an action image like this one. 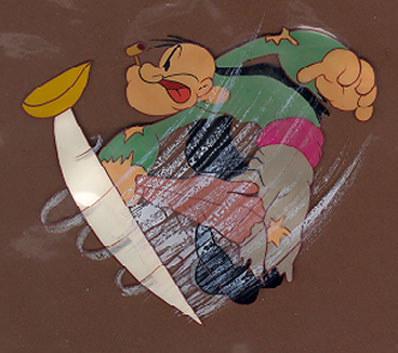 Animation Cel of Popeye and magic sword
Year: 1939
Studio: Fleischer Studios
Width of Image = 4.75 inches
Height of Image = 4 inches
Width of Art = 6 inches
Height of Art = 5.25 inches
Price $3,000
This short features Olive Oyl as a screenwriter for Surprise Pictures (“if it’s a good picture, it’s a Surprise”), working on a treatment of the story of Aladdin that will feature herself as the beautiful princess and Popeye as Aladdin, all the while speaking in rhyme. As she types, her adaptation of Aladdin comes to life on the screen, with Popeye having to use his wits against an evil vizier who seeks to control a magic lamp inhabited by a powerful genie.