Africa Squeaks is a 1940 American animated cartoon in the Looney Tunes series starring Porky Pig. It was directed by the great Bob Clampett, animated by John Carey, Dave Hoffman, Izzy Ellis, Norman McCabe, and Vive Risto, and musical direction by Carl Stalling. The cartoon is the parody of the movie Stanley and Livingstone starring Spencer Tracy and Cedric Hardwicke. The inscription on the cel reads This is an original painting I used in “Looney Tunes” and “Merrie Melodies – Leon Schlesinger. 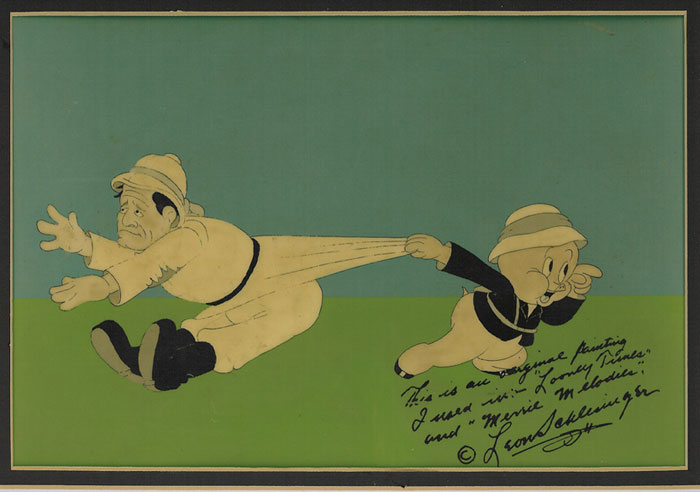 Animation Cel of Porky Pig and Spencer Tracy
Year: 1940
Studio: Warner Bros. Studios
Width of Image = 9 inches
Height of Image = 3.75 inches
Width of Art = 10.5 inches
Height of Art = 6.75 inches
Price $3,500
Dr. Livingstone, I presume Stepping out of the jungle gloom Into the mid-day sun What did you find there? Did you stand awhile and stare? Did you meet anyone? “I’ve seen butterflies galore I’ve seen people big and small I’ve still not found what I’m looking for” Thank you Moody Blues! In Africa Squeaks produced by Warner Brothers, the narrator introduces the audience to Africa. The journey begins at the heart of Darkest Africa. Porky Pig is leading a group of African people as they sing, carrying items. Then, during their song, they sing “We don’t know where we’re going, but we’re going!”. Meanwhile, a sign says, “Welcome to Africa Lions Club”. Then, Porky and the Africans approach a sour-pussed caricature of Spencer Tracy named Stanley.