Popeye the Sailor is a series of animated short subjects based on the fictional cartoon character created by Elzie Crisler Segar. In 1933, Max and Dave Fleischer’s Fleischer Studios adapted Segar’s characters into a series of Popeye the Sailor theatrical cartoon shorts for Paramount Pictures. This stock 40″ X 60″ cartoon movie poster, with a large and fantastic image of Popeye, was used to promote all of the early Popeye cartoons in 1934. There are only 2 known copies of this rare poster. It has been de-acidified and linen backed. 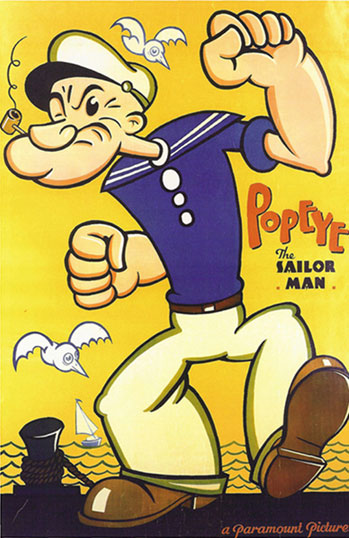 Cartoon Movie Poster of Popeye the Sailor Man
Year: 1934
Studio: Fleischer Studios
Width of Art = 40 inches
Height of Art = 60 inches
Price $12,000
The Fleischer cartoons, based out of New York City, proved to be among the most popular of the 1930s, and would remain a staple of Paramount’s release schedule for nearly 25 years. Paramount would take control of the studio in 1941 and rename it Famous Studios, ousting the Fleischer brothers and continuing production. The theatrical Popeye cartoons began airing on television in an altered form in 1956, at which point the theatrical series was discontinued. Popeye the Sailor in all produced 231 short subjects that were broadcast on television for numerous years, garnering enormous popularity with new generations.