Mouse Cleaning is a 1948 one-reel animated cartoon and is the 38th Tom and Jerry short. It was produced in Technicolor and released to theatres on December 11, 1948 by Metro-Goldwyn Mayer. It was animated by Ray Patterson, Irven Spence, Kenneth Muse and Ed Barge, who were the usual animators for the Tom and Jerry cartoons in the early 1940s up until the late 1950s. 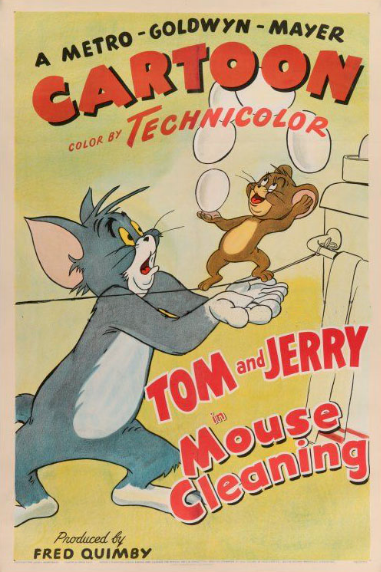 Cartoon Movie Poster of Tom and Jerry
Year: 1948
Width of Art = 27 inches
Height of Art = 41 inches
Price $2,000
This is a gorgeous linen mounted 1-sheet poster. In the film Mouse Cleaning. Jerry constantly tortures Tom by sabotaging his house cleaning efforts. This cartoon was Stepin Fetchit’s (politically incorrect as he was) only role in animation as the uncredited voice of Tom. As per most Tom and Jerry cartoons, it was directed by William Hanna and Joseph Barbera, and produced by Fred Quimby.