Winsor McCay (September 26, 1869 – July 26, 1934) was an American cartoonist and animator. A prolific artist, McCay’s pioneering early animated films far outshone the work of his contemporaries, and set a standard followed by Walt Disney and others in later decades. His two best-known creations are the newspaper comic strip Little Nemo in Slumberland, which ran from 1905–1914 and 1924–1927, and the animated cartoon Gertie the Dinosaur, which he created in 1914. 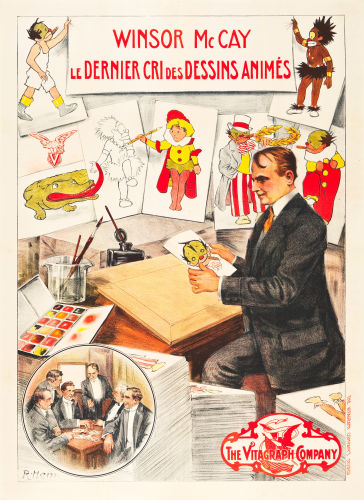 Winsor McCay Little Nemo Cartoon Movie Poster
Year: 1911
Width of Art = 39 inches
Height of Art = 54 inches
Price $30,000
James Stuart Blackton and Winsor McCay directed a ten-minute short film based on the comic strip, of which two minutes were animated. The film was first released on April 8, 1911. The first animated effort of McCay, it later achieved the status of an early animated classic. Its on screen title is Winsor McCay, the Famous Cartoonist of the N.Y. Herald and His Moving Comics, but it is usually referred to as Little Nemo. This version was named to the National Film Registry in December 2009. The two animated minutes told a story, had known characters, and while it is not the first piece of animated film, it can be considered the first real cartoon. This linen mounted poster is really the very first cartoon movie poster in history.